Woohee is best known as a member of the South Korean girl group Dal Shabet. She was also a contestant on The Unit: Idol Rebooting Project and is a member of the associated project group, UNI.T.

Woohee And Subin In Maxim

Career
Pre-debut
Bae was a trainee of the now defunct entertainment agency Medialine Entertainment, where she was slated to debut within the five-member girl group Viva Girls. The project was terminated in early 2011 due to financial difficulties within the agency.

2012–2014: Career beginings
On May 24, 2012, it was announced that Bae would be joining the pop girl group Dal Shabet, where she would be replacing former member Viki. Dal Shabet released their first teaser video of Bae on June 1, 2012. 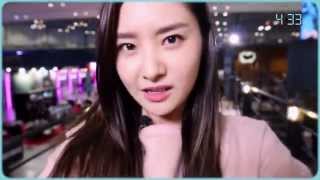 Bae wrote and composed the song Maybe, a track from Dal Shabet sixth extended play, Be Ambitious, which was released on June 20, 2013.

Bae collaborated with the band Every Single Day to release the track Nap, which was included on the band extended play Sky Bridge. The track was released on August 27, 2013 along with an accompanying music video, which Bae also appeared in. Bae made her acting debut in the 2013 SNS drama Infinite Power, where she played the recurring character Han Su-ja.

On November 14, 2013 Bae released her first solo-track, Towards Tomorrow, for the OST of the SNS drama Infinite Power.

On February 24, 2014 it was announced that Bae would be making her big screen debut through a cameo in the 3D horror movie Tunnel 3D.

2017-Present: The Unit and UNI.T
In 2017, Bae joined the KBS idol competition show The Unit: Idol Rebooting Project along with her fellow Dal Shabet member Serri. On February 10, 2018, during the final episode of The Unit, Bae placed 7th among female contestants and became a member of the final female line-up which was later revealed to be named UNI.T.

Her favorite boy band is B2ST, her favorite member is YoSeob
Some consider her Davichi Kang MinHyun Look-A-Like

– Former Medialine Trainee.
– Was supposed to debut in Viva Girls, along with Nine Muses’ Kyungri and Hello Venus’ Lime.