Winnie Harlow s a fashion model and public spokesperson on the skin condition vitiligo. She gained prominence as a contestant on the twenty-first cycle of the U.S. television series America Next Top Model due to her condition.

Winnie Harlow on a yacht in Miami

on a yacht in Miami

on a yacht in Miami 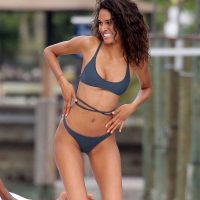 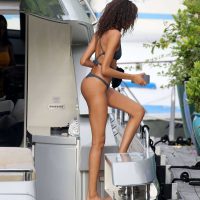 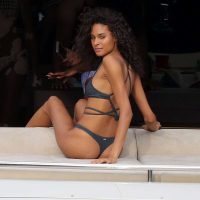 Winnie changed many schools due to bullying.

She dropped out of school at 16 due to teasing occurred as a result of her skin depigmentation condition.

She has Jamaican ancestry.

She was diagnosed with the chronic skin condition vitiligo, characterized by depigmentation of portions of the skin, at the age of four. Harlow was a victim of bullying by other children and was reportedly called a cow, zebra, and all manner of other disparaging slurs throughout her childhood by students both black and white. The verbal harassment led to her changing schools numerous times and dropping out of high school, after which she contemplated committing suicide.

Harlow was discovered by America Next Top Model host Tyra Banks on Instagram, and subsequently became one of the fourteen finalists of the twenty-first cycle in 2014. She was the first and only Canadian ever cast on ANTM. She was eliminated in the second week of the finals, and participated in a separate competition called the comeback series, where she continued to participate in the cycle photo shoots along with the other eliminated contestants in an effort to return to the competition. After completing the comeback series, she was revealed to have received the highest average public vote score, and returned. She was eliminated again in episode 13, placing sixth overall.

Following her elimination from America Next Top Model, Harlow modelled for the Spanish clothing brand Desigual and became their official brand representative.

In September 2014, she walked and closed for the clothing brand Ashish for their spring/summer 2015 collection in London Fashion Week.

She has modelled for fashion magazines such as i-D and Dazed, and for the fashion website Showstudio.com. In 2015, Harlow modelled for the Italian clothing brand Diesel for its spring/summer 2015 campaign, which was shot by British fashion photographer Nick Knight.

She modelled for the Spanish and Italian editions of Glamour magazine and was featured in the August/September 2015 issue of Complex magazine.

She was also featured in the August 2015 issue of Cosmopolitan.

She was featured on Vogue Italia website in an interview and accompanying photo shoot.

In August 2015, Harlow shot the cover of and an accompanying editorial spread in the September issue of Ebony magazine, where she appeared alongside former America Next Top Model contestant Fatima Siad.

In July 2011, Harlow posted a video titled Vitiligo: A Skin Condition, not a Life Changer on YouTube. She talked about the condition and answered questions about her life living with vitiligo.

In November 2014, Harlow spoke in a TED presentation, recalling her experience with it.

In October 2015, Harlow spoke at the Dove Campaign for Real Beauty panel at the 2015 Women in the World Foundation Summit. She was presented with the ‘Role Model’ award at the 2015 Portuguese GQ Men of The Year event.

At the 2018 Canadian Grand Prix, Harlow was invited to wave the chequered flag, signifying the end of the race. A miscommunication between race officials led to Harlow being instructed to wave the flag on what should have been the penultimate lap of the race. As a result of the application of the Formula One sporting regulations, the final result was declared based on the positions at the end of lap 68 (i.e., the official race distance was shortened by two laps from the scheduled distance of 70 laps). The error did not seriously impact the race result.

Harlow has appeared in music videos; these including JMSN The One, Eminem Guts Over Fear, and The Black Eyed Peas’ #WHERESTHELOVE.

She cameoed in Beyonce visual album Lemonade and was in one of Lilly Singh (a.k.a. IISuperwomanII) videos on YouTube named Three Girls, One Elevator.

She is signed with D’Management Group.

She has advertised for Desigual, Diesel, etc.

In 2016, she appeared in a Sprite commercial.

She walked for Ashish showing its Spring / Summer 2015 Collection during London Fashion Week.

In June 2014, she guest appeared in an episode of news show Access Hollywood.

She has a lean body which is the result of healthy eating. Winnie relies on fresh vegetables like spinach and protein sources like eggs.

Winnie was diagnosed with skin pigmentation condition (where she lost her natural skin color at various places on her body) called vitiligo at the age of 4.
She was discovered by model Tyra Banks on Instagram.
She describes herself as “vitiligo spokesmodel.”
At school, she used to be called “cow,” “zebra” and lots of other things.
Harlow also thought for a long time to commit suicide due to all the bad comments she received throughout her early life.
She was among the 14 finalists in America Next Top Model in their 21st cycle in 2014. She finished 6th.
She enjoys riding roller coasters and watching basketball.
Harlow is a huge fan of Michael Jackson who also had the rare skin condition called vitiligo.
Harlow won the “Role Model” award at Portuguese GQ Men of The Year in 2015.
She was raised by a single mom.