Tessa Thompson is best Known For For playing Jackie Cook on the TV series Veronica Mars from 2005 to 2006. 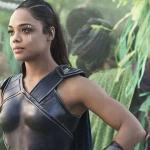 Tessa Thompson is making a name for herself in Hollywood 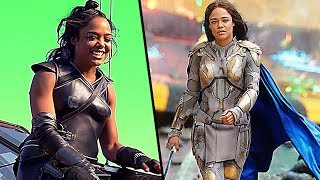 Education
Tessa studied at Santa Monica High School.
Then, she went to Santa Monica College to study cultural anthropology.
While in school, she participated in a lot of theatre and drama productions and was exposed to acting and singing at a very early age.

Family
Father – Marc Anthony Thompson (Singer, songwriter and the founder of Chocolate Genius Inc.)
Mother – Unknown
Siblings – She has a sister.
Her grandfather is the actor and musician Bobby Ramos of Latin Cruise fame.

Early life
She was raised between Los Angeles and Brooklyn, New York. Her father, singer-songwriter Marc Anthony Thompson of the musical collective Chocolate Genius, Inc., is Panamanian, while her mother is of Mexican and European descent. She attended Santa Monica High School and then Santa Monica College, where she studied cultural anthropology.

Career
Theatre
In 2002, Thompson made her professional stage debut in Los Angeles Women Shakespeare Company production of The Tempest. In 2003, Thompson appeared as Juliet in Romeo and Juliet: Antebellum New Orleans, 1836 with The Theatre @ Boston Court in Pasadena, California, which earned her an NAACP Theatre Award nomination. 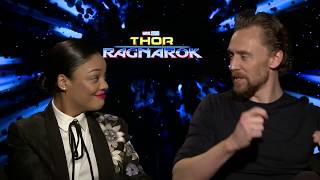 In 2016 she appeared in the off-Broadway run of the Lydia R. Diamond play Smart People at Second Stage Theatre, alongside Mahershala Ali, Joshua Jackson and Anne Son.

Her breakout film role came in Tina Mabry 2009 indie film Mississippi Damned. In film, she starred as Nyla Adrose in the drama For Colored Girls (2010), civil rights activist Diane Nash in the historical drama Selma (2014), Bianca in the sports drama Creed (2015), and as Valkyrie in the superhero film Thor: Ragnarok (2017). On television, Thompson starred as Jackie Cook in the mystery drama Veronica Mars (2005–2006), Sara Freeman in the period crime drama Copper (2012–2013), and Charlotte Hale in the HBO science-fiction thriller series Westworld (2016–present).

Television
Thompson made her first TV appearance in a 2005 episode of the CBS series Cold Case in the role of a bootlegging lesbian from the 1930s. In the same year, she rose to fame as she landed the role of Jackie Cook on the UPN/CW neo-noir drama series Veronica Mars, starring as a series regular for the show second season. In 2006, she appeared on the ABC medical drama Grey Anatomy. In 2007, she was a part of the cast on the CW short-lived drama Hidden Palms, portraying Nikki Barnes. She worked on guest star roles on Life and Private Practice, and appeared in the fourth season of Heroes.

Film
Thompson first feature film appearance was in the 2006 remake of the horror film When a Stranger Calls playing the role of Scarlet. Thompson was next seen opposite Mary Elizabeth Winstead in the dancing film Make it Happen in 2008.

In 2010, Thompson appeared in Tyler Perry stage play adaptation For Colored Girls after she directly approached Perry to be cast in the film. In 2014, she starred in Justin Simien Sundance winner Dear White People. That same year, Thompson played civil rights activist Diane Nash in Ava DuVernay Martin Luther King, Jr. biopic Selma. In 2015, she appeared in Ryan Coogler Rocky spin-off-sequel film Creed, and in Nate Ruess’ short film The Grand Romantic. In April 2016, Thompson was cast as Valkyrie in Thor: Ragnarok, which was released on November 3, 2017. In June 2017, Thompson was cast in the science-fiction comedy film Sorry to Bother You. The film is set to be released in theaters on July 6, 2018.

Ethnicity
Her father is of Afro-Panamanian descent and her mother is of Mexican and European descent.

Brand Endorsements
In 2006, Tessa appeared in a commercial for US cellular.

As a Singer
In 2014, she sang with the electro band named Caught A Ghost for a song for one of her own films Dear White People. She also served as a music composer and helped in creating tunes for the film.

First Film
Tessa played the role of Scarlet in the 2006 remake of the horror film When a Stranger Calls.

First TV Show
Thompson made her first TV show appearance in a 2005 episode of the CBS series Cold Case in the role of a bootlegging lesbian from the 1930s.

Tessa Thompson Facts
She gave her first theatre performance in 2002 in Los Angeles’ Women Shakespeare Company production of The Tempest. She essayed the role of Juliet in 2003 in the play Romeo and Juliet.
In 2017, Thompson played Monica Geller in the music video “Moonlight” by Jay-Z.
She received her first award as the Best Actor for her role in “Mississippi Damned” at the American Black Film Festival in 2009.
She is a thorough feminist and is very passionate about women equality and women rights. She is known to embrace and pursue roles that highlight racial problems and celebrate diversity.
She didn’t plan on becoming an actor. She initially had plans to elope and join the Peace Corps after she graduated from college studying anthropology.
She always had a passion for singing and also played a singer in the movie Creed (2015).
Tessa is also a dancer and has a done a cameo in a music video sung by her friends Janelle Monáe and Jidenna. The song was called Yoga.
She immerses herself in every character she portrays on screen. She moved to Philadelphia to research, understand and embrace their culture better for the film Creed.
Her wardrobe mostly consists of vintage clothes, and she purchases only vintage leather, fur, and suede. She also enjoys buying vintage silks, cotton, and laces.
As a child, she and her father would explore the hills of Los Angeles together and search for lizards and film their adventures. They called it the Lizard Hunters.
She prefers and loves to travel alone. She once had a two week holiday to Paris and even spent two months traveling solo across India.
She has a subtle tattoo on her right wrist which says “Yes.” It was to celebrate and help her remember the end of an entire year where she learned how to say “no” more often. 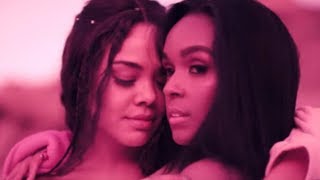