Sarah Snyder is best known for being an Instagram model, for her work on Night of the Living Dead: Genesis, Dead Woman Hollow (2013) and Scarlet Rain (2010) and dating with actor Jaden Smith. 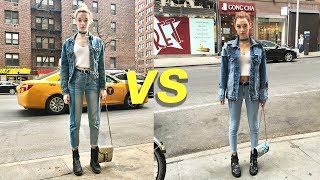 She works as a print and fashion model and a super talented one at that. She is also a social media sensation and has posted photos with the likes of Duckie Thot and Sofia Richie. She has a following of 1.2 million on Instagram with the account name, sarahfuckingsnyder.

Before she became famous as Jaden Smith girlfriend, she did some photo shoots for the likes of Urban Abstract Photography in 2014. Sarah has modelled for Forever 21 and UNIQLO, Calvin Klein, and more recently, Dolce and Gabbana. She has a stint in acting and has appeared in Night of the Living Dead: Genesis (2017), Dead Woman Hollow (2013) and Scarlet Rain (2010).

Sarah has an extroverted and quirky personality and seems to be a delinquent too as she made the news in June 2015 shortly after she started dating Jaden Smith. She was arrested and charged with one count of larceny after allegedly stealing a $15,995 Hermes bag from a New York shopping center in February of that year. After spending 56 days in prison, she showed her badassness and seems proud of her stint by printing her mugshot on a T-shirt.

After actor Jaden Smith had dated Ian Connor and had a close relationship with Kylie Jenner, fans became ecstatic and hopeful when he started dating model, Sarah Snyder. The duo began dating sometime in May 2015 and became quite an item even though Sarah is three years older than her beau.

They made quite some reputation as the panache pair who were not shy to put on some heavy PDA and show their love for each other be it at the New York Fashion Week or the premiere of Pitch Perfect 2.

Their relationship was plagued with rumors of infidelity with many reports alleging that Sarah was cheating on Jaden with a photographer called Gunner Stahl. Though the photographer posted pictures them together, the couple never addressed the rumors publicly. They, however, gave the best statements by putting on public displays of affection at the Suicide Squad premiere in New York City.

Fans who thought they were so cute together soon had their hopes dashed when Sarah and Jaden split in early 2017, after being together for two long years. They did not, however, mention the reason for their break up.

While Jaden has moved on, Sarah is single and enjoying it with her friends one of whom is Chantel Jefferies, ex-girlfriend of Justin Beiber. Rumors started making rounds that she is dating when she was seen having lunch with the actor, Leonardo Di Caprio and a group of friends at New York Estiatorio Milos. Leonardo has dated a bevvy of models including Gisele Bundchen, Bar Refaeli, Erin Heatherton, so it may not be any different with Sarah but reports have it that they are just friends for now noting that they left separately.

Brand Endorsements
As a model, she has modeled for UNIQLO, Forever 21, Calvin Klein lingerie, etc.
She has also served as the face of KAWS.