Montana Cox is Best Known For Being the winner of the cycle 7 of Australia Next Top Model in 2011. Having modeled for fashion heavyweights like Chanel, Dior, Oscar De La Renta, Lanvin, and many more. Having walked at some of the most-coveted runways at Milan Fashion Week, Paris Fashion Week, and Australian Fashion Week among others. 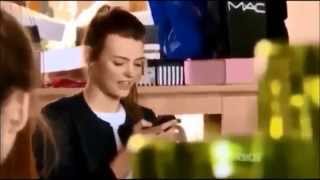 Education
Montana attended the Warrandyte Primary School in Victoria and graduated in 2005. She went on to study at Eltham College and completed her year twelve in 2011. While studying there, she was the house captain of the Nillumbik House (one of the 4 houses, the students were divided into).

Australia Next Top Model
Cox was announced the winner of Australia Next Top Model, Cycle 7 at the Sydney Opera House on 25 October 2011, defeating Liz Braithwaite and Simone Holtznagel in the final. She is the second winner hailing from Victoria, with the previous Victorian winner being Alice Burdeu of Cycle 3.

In episode 1, Cox was singled out for her potential in the natural beauty photo shoot. She made it into the top 20 and travelled to Paris, France where photographer Jez Smith stated, you can’t take a bad picture of that beautiful face. In episodes 5 and 6, Cox was declared a frontrunner after being the first girl to gain two consecutive first call-outs. During episode 6, American photographer Gabrielle Revere stated, I could see you in New York, I could see you at the castings. I really do Montana. I think you’ve got it.
In episode 9, Cox became a contender again after photographer Simon Upton stated, I was really impressed with Montana. She is the one to beat in this competition. In episode 10, Cox gained her third first call-out for her vintage lingerie photo shoot. In episode 11, Cox won the go-see challenge after designer Fernando Frisoni stated, I would book her with my eyes closed. I’d consider her opening my show. In the same episode, she was the first girl through to the finale at the Sydney Opera House. In episode 12, the final three flew to Dubai, United Arab Emirates where they participated in two high-fashion photo shoots. Photographer Georges Antoni stated that Cox was his favourite after both shoots.
During the final judging, Sarah Murdoch, Charlotte Dawson and Antoni gave their verdict that Cox should be the winner, with Murdoch calling her a supermodel in the making. In episode 13, designer Alex Perry likened her to Cindy Crawford and stated she is the calibre of girl you would see in any international fashion magazine. After winning, Harper Bazaar Australia editor Edwina McCann stated Cox was, the greatest discovery for Australia Next Top Model or any Next Top Model series.

Cox is the second winner of the show to have never made a bottom two appearance.
Whilst being on the show, Cox won a national campaign with Blackmores as well as a spread in the Telegraph Sunday magazine.

As the winner, Cox appeared on the cover of Harper Bazaar Australia, as well as an eight-page spread in the magazine. Her other prizes included a modelling contract with Chic Model Management, twenty thousand dollars in cash, a Ford Fiesta and an overseas trip to New York City to meet with NEXT Model Management.

Cox has since gone on to be one of the celebrity faces of FOXTEL. It was also announced that Cox would appear in the campaign for David Jones department stores for the 2012 Autumn/Winter collection alongside models Miranda Kerr and Samantha Harris. Cox has also appeared in campaigns for Betts Shoes, Lovisa, Witchery A/W 2012 campaign and Maurie and Eve Winter 2012 campaign. 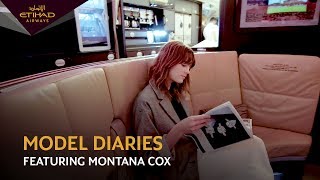 In February 2014, Cox walked as a Givenchy exclusive at Paris Fashion Week Fall 2014.

In October 2015, Cox was ranked by Cosmopolitan as one of the most successful contestants of the Top Model franchise.

Personal life
Cox was house captain of the Nillumbik house at Eltham College, and finished year twelve in 2011. She attended Warrandyte Primary School and graduated 2005. Her hobbies include netball, basketball, running and going to the gym. Her father, Darryl Cox, is a former professional Australian rules footballer. 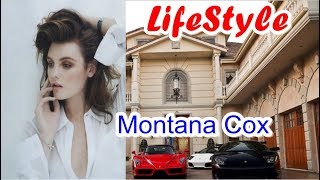 First TV Show
In 2011, Montana made her first TV show appearance as herself on the reality television series Australia Next Top Model.

Personal Trainer
Montana is blessed with a svelte figure but also works hard at maintaining it. She tries to work out every day even if it is for only 15 minutes due to her busy schedule. Montana likes to begin her day by exercising in an open space like the Bondi Beach as she considers the gym to be very claustrophobic. She also relies on outdoor activities like swimming and sports to keep her feeling fresh and healthy.
When it comes to her workout, she prefers exercises that can be done for an interval of 1 minute. According to Montana, her body responds well to 1-minute of lunges, 1-minute of squats, 1-minute of push-ups, and 1-minute of planks on each side.
Diet-wise, she eats everything but believes in the power of moderate eating. Montana revealed her diet plan in 2014, which is as follows –
Breakfast – For breakfast, she relies on a cup of coffee to get her out of bed and follows it up with some fruit and muesli. She supplements her diet with some vitamin and minerals, a shot of chlorophyll, vitamin C, iron, and olive leaf to boost her energy levels.
Lunch – As she is mostly out for work during noon time, she may opt for a chicken salad and a smoothie to fill her up for all the ensuing activities.
Dinner – As she loves Japanese cuisine, her dinner usually consists of sushi, sashimi, and a miso soup and edamame.
Dessert – Chorizo-flavored ice cream or Lindt Dark Sea Salt Chocolate
Snacks – Almonds and dates

Montana Cox Facts
She can play the violin.
Montana was ranked as one of the most successful contestants to come out of the Top Model franchise by Cosmopolitan magazine in October 2015.
Montana is very athletic by nature and her hobbies include playing netball, basketball, running, and going to the gym.
In her downtime, she enjoys going to the steam room at Equinox in New York. She also loves the infrared sauna at the Nimbus and Co at Bondi Beach in Sydney.
Montana also loves cooking. She enjoys cooking everything from baking stuff to making sushi. 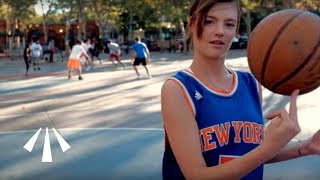