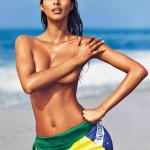 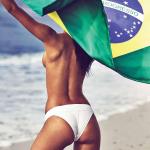 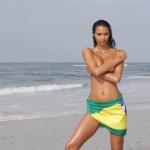 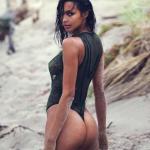 Lais Ribeiro in Bikini at the Beach in Miami

Lais Ribeiro in Bikini on the Beach in Los Angeles

Lais Ribeiro - Swimwear at the beach in Tulum - June 2019

Lais Ribeiro - Swimwear at the beach in Tulum - June 2019

First TV Show
Apart from the fashions shows on television, she guest appeared in the comedy TV series New Girl as herself in 2014 in an episode titled “Prince.”

Personal Trainer
She maintains her healthy body by going to the gym every day and doing her own exercises like yoga and aerobics. She likes to do exercises, which targets or works the complete body.

Career
A year after giving birth to her son Alexandre, she gave in to a friend advice and started working as a model in her native Brazil. It didn’t take long for her to move on and in 2009 she walked the major international catwalks for such designers as Shiatzy Chen, Chanel, Louis Vuitton, Gucci, Dolce and Gabbana, Versace, and Marc Jacobs. During the fashion week of Brazil for the spring/summer 2011 collections, Ribeiro was the most booked runway model with 27 shows during São Paulo Fashion Week and 26 shows during Rio Fashion Week.

She has been photographed for American, Brazilian, German, and Italian Vogue, and appeared in ad campaigns for Ralph Lauren, Christian Dior, Tom Ford, GAP and American Eagle.

She became a Victoria Secret Angel in 2015. In 1 November 2017, Ribeiro was chosen to wear the Champagne Nights Fantasy Bra for the 2017 Victoria Secret Fashion Show held in Shanghai, China in 28 November 2017. The $2 million dollar bra, named the Champagne Nights Fantasy Bra, was created by Mouawad. The bra and its matching belt is handset with 6,000 yellow diamonds, yellow sapphires, and blue topaz in 18 karat gold.

Personal life
Ribeiro has a son, born on May 17, 2008. In 2015, she began dating American basketball player Jared Homan. She is of Amerindian, German, and African descent.

Lais Ribeiro Favorite Things
Food – Pizza
Perfume – Victoria Secret seduction scent
Beauty Products – Decleor Paris Aromessence Rose D’Orient Soothing Serum, Bioderma Crealine H2O
Source – HarperBazaar.com, Modelinia.com
Lais Ribeiro Facts
Lais is friends with models Cora Emmanuel, Ieva Laguna, Keke Lindgard, Rose Cordero, River Viiperi, and Thiago Santos.
At the age of 19 (in 2009), she started modeling locally.
Candice Swanepoel and Adriana Lima are her inspirations.
In 2011, during the Brazil fashion week for the spring / summer 2011 collection, she was the most booked runway model. She has 27 shows during São Paulo Fashion Week and 26 shows during Rio Fashion Week.
She has walked in 2010, 2011 and 2013 Victoria Secret Fashion Show.
Lais injured her ankle during rehearsals and so didn’t appear in 2012 Victoria Secret Fashion Show.
She does not like to wear a lot of makeup daily. But, mascara is one thing, which she likes to use a lot.
Alongside Candice Swanepoel and Adriana Lima, Lais was featured in Victoria Secret Valentine Day commercial in 2012.
She gave birth to her first child, son Alexander in 2010 (at the age of 19).