Anna Faith is best known for impersonating the character of Queen Elsa from the Disney animated film Frozen.

Anna Faith Carlson on Twitter I love my sister!

Attractive blonde Anna Faith became internet sensation thanks to her cosplaying. In this hobby, having gorgeous measurements certainly pays off. And Anna Faith can be proud of her hourglass shaped figure with 32DD bra size. Her curves are all natural, she doesn’t have breast implants or other type of cosmetic surgery. 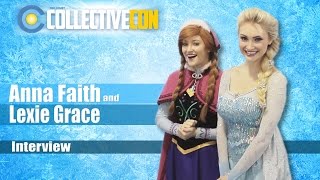 Early life
Carlson grew up with her sister Lexus Grace in Daytona Beach, Florida. Her parents are Jim and Karen Carlson. Her mother created the Elsa dress that she wears when performing. She has been publicly performing and modelling since she was in the second grade. She graduated high school in 2014. Her sister, Lexus Grace, portrays the other famous character from Frozen, Princess Anna. Faith became engaged to her long time boyfriend on July 30, 2017.

Career
She gained notable widespread media coverage in 2014 when she was discovered on Instagram as an Elsa look-alike. Carlson has been an extra in several films. Besides acting and modeling, Carlson plans to record an album. She was invited to attend a royal party in the United Arab Emirates. Carlson and her sister have appeared on radio stations, TV shows, and magazines. They have a fan base of over 1 million social media followers. She was named one of the top ten most popular cosplayers in the world. 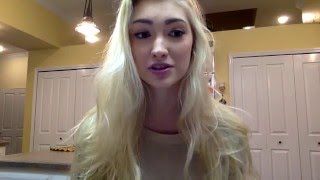 Carlson started to branch out and cosplay as characters from other films and comic books, including Rey from Star Wars and Harley Quinn from Batman. Anna has portrayed characters from Harry Potter, Maleficent, Cinderella, and Spider-Man, among others. Carlson and her sister are known as the ‘Frost Sisters’. Carlson appears at cons and other events, serves as a model. She was named one of the Top 7 Sexiest Cosplayers in 2015. Articles about her Frozen resemblance have been featured on Playboy.

Carlson cosplay of Harley Quinn received attention in 2016 when she was compared to Margot Robbie portrayal of Harley Quinn in the movie Suicide Squad. Her versatility while cosplaying has been touted. In late 2016 Carlson was once again named one of the hottest cosplayers in the world. Carlson was named Queen of Disney Cosplay for her work portraying various Disney Princesses.

Following the release of Fantastic Beasts and Where to Find Them, Carlson cosplayed as Queenie Goldstein in January 2017 during the annual A Celebration of Harry Potter fan event that took place at Universal Orlando. She debuted her new cosplay as Wonder Woman in April 2017 where she was recognized at C2E2 as one of the best cosplayers to appear at the Chicago Comic and Entertainment Expo. 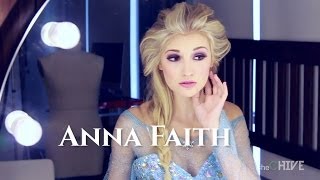 Other work
She also entertains cancer patients. Carlson and her sister travel together with their mother and manager Karen for hospital visits, charity events, fundraisers, and schools.

She did some modelling gigs since elementary school. In 2014, her Instagram account encountered wild increase of followers thanks to her cosplay costume of Elsa from Disney Frozen. After this success, Anna Faith started to do cosplaying also of other characters but Elsa remains her signature costume. Anna is involved in several charitable causes and for example entertains cancer
patients.

Anna Faith works out on a regular basis to maintain her curvy, well-toned physique and has often shared her workout videos on her Instagram account. She includes a variety of exercises in her workout sessions and her typical workout comprises of –

Pajamas – The ones with the ‘cookie-monster’ print

She was brought up in Daytona Beach, Florida along with her younger sister.
She has a pet dog named ‘Fawn The Pom’.
Anna Faith, along with her sister Leslie, often attend birthday parties. They are popularly known as the ‘Frost Sisters’.
The sisters often attend various social events like fundraisers and charity events and also visit hospitals, churches, and schools.
She often visits cancer patients and entertains them.
Anna Faith started performing and modeling when she was in the 2nd grade.
Her Elsa dress was made by her mother.
She has been a part of a number of TV shows, radio programs, and magazines along with her sister.
In 2014, Anna Faith was discovered as an Elsa look-alike via Instagram.
She was once invited to attend a royal party in the United Arab Emirates.
Anna Faith has cosplayed several well-known fictional characters such as Rey from Star Wars and Harley Quinn from Batman along with some characters from Harry Potter, Maleficent, Cinderella, and Spider-Man.
She has also been selected as one of the top 10 cosplayers across the globe.
In 2015, Anna Faith was named one of the “Top 7 Sexiest Cosplayers”.
She has also been a part of the Playboy magazine due to her resemblance with the Frozen character, Queen Elsa.
In 2016, Anna Faith did an excellent cosplay of Harley Quinn from Batman and it was even compared to Margot Robbie‘s portrayal of the character of Harley Quinn in the superhero movie, Suicide Squad.
In 2016, she was again named as one of the hottest cosplayers in the world.
Anna Faith has also been named as the “Queen of Disney Cosplay” for her remarkable portrayal of a variety of Disney characters, especially several Disney princesses.
In January 2017, she cosplayed as Queenie Goldstein from the fantasy film, Fantastic Beasts and Where to Find Them, during an annual fan event, A Celebration of Harry Potter, at Universal Orlando.
In April 2017, Anna Faith cosplayed as the fictional superhero, Wonder Woman, and was named as one of the best cosplayers to appear at the Chicago Comic and Entertainment Expo.
She has also appeared in a couple of films as an extra.